STORM® Canis is a totally natural feed supplement that can help all working and sporting dogs work at optimal speed and power for longer. 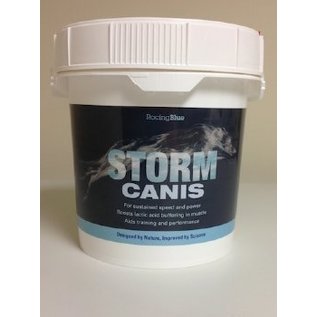 STORM® Canis is a natural complementary feed supplement that can help all working and sporting dogs work at optimal speed and power for longer. It should be added to the normal diet, thus providing part of a normal balanced ration.

STORM® Canis is scientifically proven to delay muscle fatigue and the ‘burn’ of lactic acid build up in muscles, which means that your dog can perform at maximum speed or power for longer. Moreover, it supports muscle repair and speeds recovery.

The combination of active ingredients in STORM® Canis is unique worldwide. Developed by the world's leading authority on Carnosine, this revolutionary product can transform your dog in any discipline, both in training or competition.

STORM® Canis is rigorously tested for Naturally Occurring Prohibited Substances (NOPS) prior to release for sale and is a completely legal feed additive.

Remember - STORM® Canis is a complementary feeding stuff for working dogs to be fed alongside a normal balanced diet.